This paper outlines a defense of the project of seeking to interpret Plato’s political thought as a valid method of interpreting Plato. It does so in two stages: in the first part, by rebutting denials of the possibility of interpreting Plato’s thought at all; in the second part, by identifying one set of ideas arguably central to Plato’s political thought, namely, his profound rejection of political anarchy, understood in terms of the absence of the authority of officeholders and posited both as characteristic of democracy and as the origin of tyranny. This approach to anarchy and its relationship to tyranny is, I contend, a Platonic innovation (so far as we can judge from surviving texts), and must be understood against the background of Greek writings that straightforwardly opposed the two. I aim here to show, on the one hand, that denying tout court the project of seeking to interpret Plato’s political thought is an implausibly extreme position, and, on the other, that pursuing that project can bear valuable fruit.

Authors retain copyright and grant the journal right of first publication with the work simultaneously licensed under a Creative Commons Attribution License that allows sharing the work with recognition of authorship and initial publication in this journal. 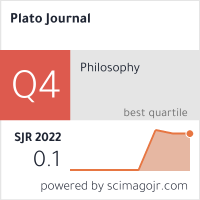